According to the UN, March 20 is recognized as International Day of Happiness. As communities in South Carolina and across the country face a growing pandemic, it’s more important than ever to focus on positivity and take time to appreciate the things that bring us happiness each day.

To help lift some sprits, we’re sharing a few uplifting stories from members of our community who were recently impacted through the programs and services of Palmetto Goodwill. 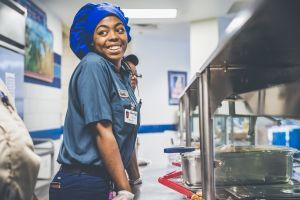 Research published in the journal Psychosomatic Medicine found people who have more positive emotions are less likely to develop the common cold.

As a 66-year-old United States Army veteran, Harry approached Palmetto Goodwill with a tentative eye on Goodwill’s Career Credentialing program. Throughout an initial sit down and subsequent discussions of career intentions, it became readily apparent that Harry wasn’t quite ready to enroll in a training program but needed help none the less.

Palmetto Goodwill quickly worked to re-activate his prepaid phone, so that he could maintain communications with Goodwill’s Career Navigators and discuss his options.

Over the next few weeks, Goodwill managed to set up his first email account since the military, then fine-tuned his resume to follow ATS standards.

Harry quickly became a “regular” in terms of face to face services and worked hard to find gainful employment in the local area, while consistently checking in and working with a Goodwill Career Navigator.

As of March 2020, Harry Howerton is now employed with Berkeley County Schools. 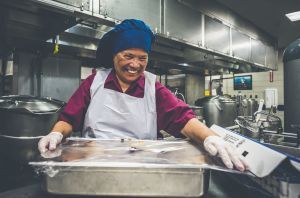 Multiple studies have shown people who donate to charities will feel happier thanks to a trigger of feelings of reward.

A 24-year-old Army veteran working part time in sales, Malik approached Palmetto Goodwill with a desire to change the trajectory of his life.

He desired a means to make a living, while also gaining the opportunity to see and experience new places.

Acquiring a Commercial Driver’s License (CDL) seemed to be a good fit.

Malik enrolled in our CDL Class A course in January, then graduated in February. Admirably, Malik scored an impressive 100 on the DMV’s proctored exam.

Malik has already secured employment with Werner Enterprises and is well on his way to traveling the country. 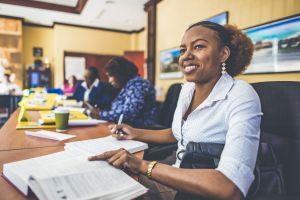 According to a 2010 study out of the journal BMC Medical Research Methodology, bright colors go hand-in-hand with happiness.

Norman is a 54-year-old Army veteran who enrolled into Palmetto Goodwill’s CDL Class A in January alongside Malik. Likewise, Norman also graduated the course in February with a CDL in hand.

Following the course, Norman also has secured employment with Werner Enterprises and maintains communication regularly with his Career Navigator.

Both Malik and Norman completed, then exited the program exactly four weeks from their initial start date.

A 24-year-old Marine Corps veteran, Michael was referred to Palmetto Goodwill through a mutual contact, a College of Charleston veteran advocate. 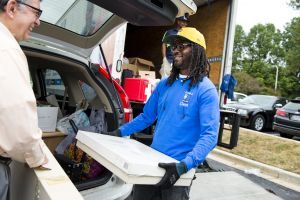 According to a study published in the journal Global Environmental Change, being outdoors makes people happier.

Throughout a few initial sit downs Michael conveyed a certain level of dissatisfaction with his current role and began to seek a career transition.

Noting a background in welding for the Marine Corps, Michael was inclined to try his hand at Palmetto Goodwill’s own welding program.

Since his initial enrollment, Michael has been an outstanding student, showing up on time every day while consistently scoring high on proctored exams and mentoring other students.

While Michael is still completing the course and weighing his career options, his Goodwill support team has no doubt that he will find gainful employment—should he apply the same level of drive that has been demonstrated throughout his career transition process.

Every day, Palmetto Goodwill works to assist members of our community like Michael, Malik, Norman and Harry. “The system works, and folks are benefiting from it” said Joe Queen, a United States veteran and one of Palmetto Goodwill’s Career Navigators, who works tirelessly to ensure individuals throughout South Carolina benefit from the range of career opportunities that Goodwill provides. For more than 40 years, Palmetto Goodwill has helped people achieve their full potential through the dignity and power of work.

Hopefully, these brief spotlights helped to create a few smiles as we all celebrate International Day of Happiness. What are some things that make you happy? Share them with us in the comments below or on our social media channels!