This week’s focus was costumes that couples can wear, so I decided to recreate the “Scoops Troop” uniforms from Stranger Things.” 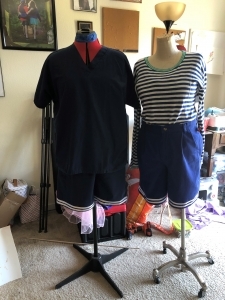 I started by visiting the Palmetto Goodwill in Johns Island, James Island, and the Clearance Center in North Charleston and found all of the costume pieces to alter. For the “Scoops Troop” uniforms I did a basic breakdown of Steve and Robin’s outfits.  The uniforms are for a nautical themed ice cream restaurant in the show.  Steve’s uniform is a darker blue shirt with a sailor collar, shorts in the same color, knee high socks, sneakers, and a sailor’s hat.  Robin’s costume is a striped blue shirt with a sailor’s collar, blue shorts, a vest, knee high socks, red sneakers, and a sailor’s hat. For Steve’s uniform, I found a pair of navy scrubs that were a close color match to each other, a dress shirt that was a similar color to the scrubs, and a red t-shirt.  I first found a blue sweater that had the perfect stripes and neckline for Robin’s shirt and a pair of blue shorts that were a close match to the stripes colors.  For the vest, I found a t-shirt that was a near identical color to the shorts.  For the shoes I found a pair of black converse All-stars and a grey pair (that I painted red using a mix of spray paint and acrylic paint). The socks were sourced from the Dollar Store.

The first step in Steve’s costume was cutting the long scrub pants into shorts, making sure they were the correct length for the person wearing it.  I added a ⅝” amount to it when cutting and then folded that part under and used stitch witchery to create a hem for the shorts. 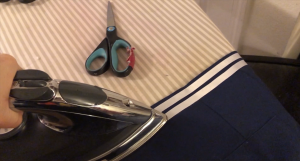 I then used the Stitch Witchery to iron ribbon stripes to Steve’s shorts, Robin’s shorts, and Steve’s shirt sleeves.  The Stitch Witchery is a fusible sewing substitute, so once it is heated by the iron, it fused the ribbon to the shorts.  I drafted a collar out of tissue paper for Steve’s collar and cut the shape out the large dress shirt I bought in the same color.

I cut the collar again out of the red T-shirt, adding about an inch to the shape for the border on the collar and also to leave enough room to turn the edges under (which is just a fancy way of saying, keeping it from having raw, frayed edges).  Once the pieces were cut out, I added two lines to the collar using fabric paint (you can continue using the ribbon from before and Stitch Witchery if you choose to).

Once dry, I sewed the collar to the scrubs.  I also made an insert for the top of the shirt using the red t-shirt and painted a stripe on it with fabric paint.  To finish the costume, I hand painted an ice cream cone on the sleeve using a mixture of Fabric paint (for flexibility) and Acrylic Paint (for opacity). 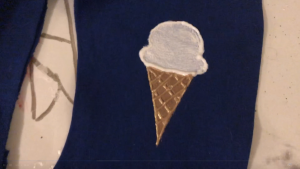 I put a layer of just fabric paint down first and then filled it in with the Fabric/Acrylic paint mixture.  The final piece was the tie on the collar.  I cut a large oval shaped piece of the red t-shirt, folded it in  half, and use stitch witchery to keep the pieces together.  Once cool, I used the open red pieces of the sailor collar to tie the long piece in place. 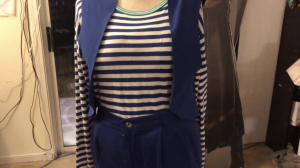 For Robin’ costume I drafted a collar for the shirt with tissue paper, tracing the neckline front and back and then drew the shape I wanted for the collar.  I cut two identical pieces out of a bed sheet and sewed them together, front facing front, and then turned the piece inside out so the part I wanted seen was showing and ironed it stiff.

I opted to turn the edges under and used stitch witchery to hold the hem in place and then painted an ice cream cone on the vest using the same mixture I used for Steve’s Ice cream cone.  I then cut a smaller version of the long oval for Steve’s collar, folded it in half, and ironed it together with stitch witchery.  I then used a small rectangle piece to sew it into place on the shirt.  I also trimmed the sleeves to the correct length. 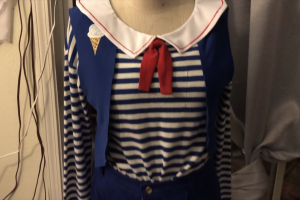 For Robin’s shoes I couldn’t find a pair of red All-Stars in my size, so I used a grey pair and painted the shoes with layers of spray paint and acrylic paint.  Once dry, I used Acetone (Nail Polish remover) to remove excess paint from the silver fixings and to remove paint and dirt from the bottom rubber part of the shoe.

Finally I found sailor hats at the Halloween Store to alter for the sailor hats.  It came with a patch, which I removed.  The patch did not come off smoothly, so when I drew my “ahoy” on the hat with a pencil, I tried to incorporate the parts that the patch had left behind on the hat. I then painted both hats with fabric paint and left them to dry.  And with that, my Stranger Things costumes were complete!